In an article published by Research-Technology Management Magazine, Manny Frishberg says analysts point out that “while companies rarely look into the currency trends of the countries they are planning to expand into, the effects of foreign exchange rates on the transaction can result in multimillion-dollar mistakes.” In some instances, unexpected changes in currency prices can greatly increase a company’s exposure to financial risk.

Swings in currency valuations can also drastically cut into savings. They can even, in rare circumstances, make outsourced projects more expensive to produce than in-house. Despite the risk of such fluctuations when IT outsourcing, managing the risk is often not a top priority for businesses. Understanding how to manage currency risk can help businesses cut down on costs and mitigate their exposure to fluctuations in exchange rates.

Not all businesses will choose to manage their currency risk. Some organizations may come to the conclusion that it is easier to pay for IT services at a fixed price in United States dollars despite the potential loss that could arise from disfavourable fluctuations. However, it is important to understand and consider the options businesses.

Even current clients of offshore services should consider renegotiating their contracts to better manage currency risk.

Outsource providers are willing to renegotiate because they often have experienced significant margin expansion due to the currency benefits they have gained at the expense of the customer. - David Rutchik, a partner at outsourcing consultancy Pace Harmon.

Exchange rates are complicated and never purely based on monetary and financial situations. They are influenced by an intricate set of components including the country’s trade policies, rate of inflation, politics, and domestic investment climate. It may not be able to predict their changes but it is possible to manage their risk.

To answer the question above, let’s look at a hypothetical United States-based firm, AmTec, that outsources to a hypothetical Polish IT outsourcing firm, PolTec. The currency in the United States is the U.S. dollar and in Poland is the Polish zloty.

According to Forrester principal analyst Dr. Paul Roehrig, outsourcing vendors generally have better capabilities for taking on costs derived from shifts in currency prices. Clients have the option of negotiating to have the outsourcer absorb the greater portion of exchange rate risk. This sort of arrangement is known as “banding”.

Banding involves the outsourcer taking on the majority of the risk of currency changes -up to a prearranged and agreed upon percent below or above a baseline exchange rate. This range up or down from the baseline is the “band” in “banding“.

If the rates were to rise above the upper “band”, the client ends up paying more. However, if the rate sinks below the lower bound of the band, the client will pay less. In order for the arrangement to work, both client and outsourcer have to agree on the rate of monitoring fluctuations, the indices used for tracking the money changes, and the process for handling variances.

2. Pay for services in the outsourcer’s local currency

Another option, that is especially favored by businesses with long-term contracts, is to pay in the local currencies of the offshore providers:

This works well for US firms as generally, the United States dollar tends to trend higher against emerging market currencies over the long run. It also works well for businesses in other countries with strong currencies.

However, in the short term, mentioned market movements can be sporadic and unpredictable. In some periods the US dollar loses value against other currencies. When this happens, paying in local currencies can end up costing more than it would have to pay in US dollars. It can also be a hassle for clients who don’t have a pre-existing business presence in the market to facilitate paying IT outsourcers in local currencies. 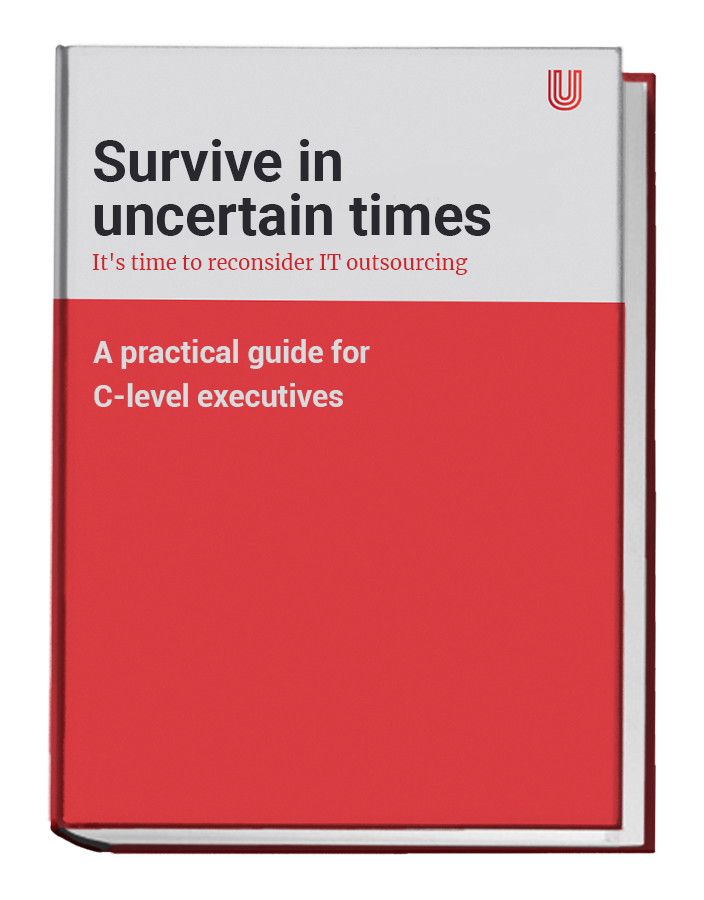 Another option is to pay outsourcers in United States dollars tied to the local currency in the location being outsourced to. In this arrangement, the client pays in USD but the amount paid fluctuates based on the movement of the local currency where outsourcing work is provided from.

This approach is favorable for outsourcers as they are able to stabilize profit margins and are not forced to cover losses by cutting service which, ultimately, helps clients receive a stable service.

4. Use a “Look-Back” average to set rates for future payments

A more complicated option is by applying a “look-back” average to set rates for future payments. When using this method, the customer pays in USD tied to local currency movements but not in real-time. The customer and IT outsourcer determine the average fluctuation over a certain time period—3 months, 6 months, 1-year, etc. They “look back” over this time period and apply the average prices movements during the period between the local currency and the USD to a forward-looking period of payments.

This “look back” is conducted once a year or more over the course of the contract term. This type of arrangement provides a degree of stability for both the client and IT outsourcer. However, in some cases, the “look back” period will contain wild fluctuations in exchange rates which can negatively affect the arrangement.

5. Hedge against fluctuations in exchange rates

Customers cooperating with technology partners can use the same hedging strategies that their service providers do. However, it is not easy and is extremely financially expensive. It involves creating a dedicated team of financial analysts who develop and execute hedging strategies for your company to combat the risk.

Generally, this method is only effective for massive organizations that spend multiple millions on nearshoring or offshoring and have millions of dollars in capital that could be saved through currency hedging. It is exceptionally risky. If analysts bet in the wrong direction on exchange rates it can be costly to your firm.

A less-common option that has been gaining prominence in recent years is the notion of adding a provision into a new contract that gives the client the option to renegotiate the payment terms if the exchange rate moves against them. In some instances, buyers add a clause that allows them to terminate the deal entirely if prices go south. In many cases, IT outsourcers are willing to accept these terms.

There are many different options available to manage currency risk in IT outsourcing. One way is by “banding”, another option is to pay your outsourcing firm in their local money, some businesses choose to pay in USD tied to the local currency.

In the end, the real goal is to broker win-win contracts that are acceptable and beneficial to each party. Currency risk is a two-sided sword that can work for or against either party. An important part of every healthy business relationship making sure that the parties are working towards these win-win situations.

If you want to learn more about outsourcing and how it can help your business, subscribe to receive a free informative ebook.

Nearshoring Or Offshoring: Choose The Right Option For Your Business

5 Ways The IT Sector Will Be Influenced By Coronavirus

As coronavirus wreaks havoc with the global economy, a tsunami of change awaits many industries. The IT sector is no different. Yes, the travel and hospitality industry is likely to be the hardest hit…
4 min read
BUSINESS

How Outsourcing Can Help Your Business In Turbulent Times?

C-level executives have a lot of tough decisions to make, especially today. Even companies that used to be fully in-house and have on-premise teams are rapidly changing the way they do business. More…
3 min read