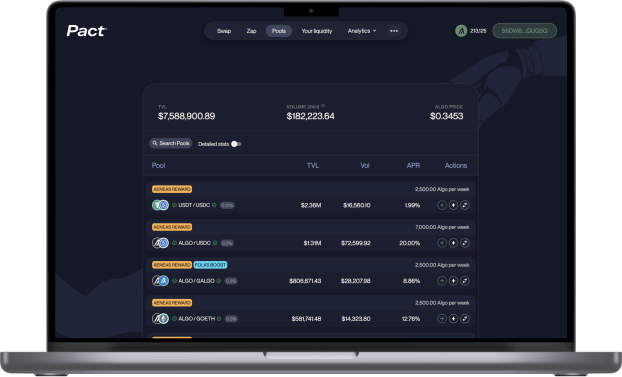 Pact is a decentralized peer-to-peer protocol operating on Algorand. Pact entails the works of a decentralized Automated Market Maker (AMM) technology and aims to become home of Liquidity for the Algorand Blockchain.

Pact is an Automated Market Maker protocol that was formed in October 2021 and launched in mainnet February 2022 on Algorand blockchain. It was an important addition to Algorand’s ecosystem which before Pact’s release had only one main AMM protocol facilitating Algorand Standard Asset swaps. Ulam Labs is more than just a long-term partner of Pact–we are aligned members of the core Pact team.

Pact had to be built in a similar manner as other AMMs. That means we had to deliver the functionality that allowed for swaps, participating in liquidity pools and the algorithms to run it in an automated manner, determining price based on supply and demand in the pools.

Pact had to work flawlessly both on the swap and on liquidity pools ends (LPs). LPs are key to offering a smooth platform experience which is why they had to be built in a way that incentivizes users to lock their assets in pools and works in real-time.

Security is an absolute priority in AMMs since once they are released, any exploit or bug poses a risk to the user’s funds. Our code has undergone a formal security audit conducted by Runtime Verification and Kudelski Security.

Pact had to leverage Algorand for its near-instant 4.5 s transaction times and carbon-negative footprint. That meant it would have to run natively on Algorand, support all Algorand Standard Assets, and work with dedicated wallets.

Pact is a decentralized peer-to-peer Automated Market Maker protocol operating on Algorand blockchain. It was designed to facilitate Algorand Standard Assets swaps based on Liquidity Pools and proprietary smart contracts.

The individual’s funds are locked in a smart contract which is stored securely on the Algorand Blockchain. No one at Pact or Ulam Labs team has, or will ever have any admin control over these published contracts.

Thanks to Algorand’s atomic swaps and its ~4.5s transaction times, the transactions are settled almost instantly. This enhances the overall security of the platform.

Pact’s interface has been designed to be one of the most user-friendly in the space. It’s mobile-first, offers deep liquidity, and low transaction fees.

Users participating in providing liquidity can earn various tiers of fees, ranging from 0.01% through 0.3% for most pairs, up to 1%.

Want to build crypto product with us?