Flask is a cancer 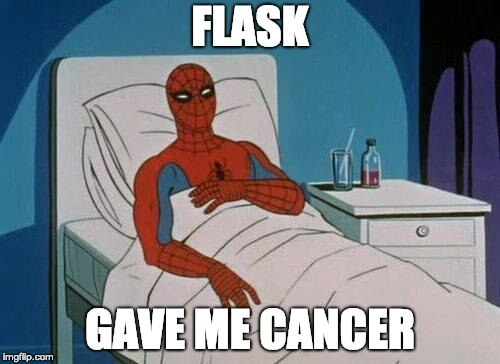 Over the course my professional career I have seen many production implementations of Flask and all of them had suffered from the same problems. Today I want to point out these problems and convince you to not choose Flask as the framework for your next application.

The diagnosis of Flask as a Python framework

Flask is the 2nd most popular Python framework just after Django. It's popularity comes from excellent documentation and ease of use.

A simple working application can be written in just about 5 lines of code:

Which is, of course, a great thing. Unfortunately this seeming easiness is the only thing that Flask has to offer. When your app starts facing real business requirements, the Flask has only simple (and primitive) ways of solving them.The consequence is that you have to act as if you had chosen badly designed low-level framework for experienced developers.

This is the reason Flask is a trap for developers - they choose it because it promises swift and easy development but after the app gets bigger, they end up with framework architecture that is not suitable for large apps.

So Flask is a trap, but who is the most likely to get caught in it?It could be anyone, of course, but I think there are 2 types of people that are particularly vulnerable:

So they choose Flask over other frameworks like Django or Pyramid.

Oh yeah, this is the worst thing. In fact, it is so terrible that it could be listed as the sole reason to avoid Flask. It starts quite harmlessly, you have g object so that you can attach any global objects to it and it is there to use in any parts of your application. This concept is OK when you write a toy app but it becomes the source of all evil for an app that is maintained by a team of developers.

The nightmare begins when you start realizing that your code is invoked not only by incoming requests but also:

For each of these, you need to prepare a separate code that bootstraps your global variables.

For unit tests, if you won't unify them, then you could end up with dozen initialization techniques introduced by you and your fellow developers like described in Flask docs (if you need user object, just insert it).

After all, what you really need is to unify ALL entry points to single initialization function, which means you need to fake web request for celery tasks and scripts and pretend that you are always in web request context.

Back in 2012, the SQLAlchemy was superior to Django ORM. But that’s in the past now. From my experience, SQLAlchemy is complex, takes considerable time to master it and even then it can still bite you. Just go to Session Basics section in the SQLAlchemy documentation and see how detailed it is. Then take a peek at State Management and Managing Transactions. In my opinion, SQLAlchemy can be a good alternative to Django ORM but only in some very, very specific use cases but thus far I was not able to find those in my projects.

What does it mean? You have to bootstrap the app yourself.
The biggest problem is that the Flask mixes imperative and declarative way of configuration and encourages you to do so.

To glue all parts together you end up with ugly Python module that is responsible for bootstrapping the app. Mysterious import order (just try to change it!), ifs everywhere, decorators, ugh.

How can this be done better?

In Django, the framework bootstraps the app for you: it reads settings file(s) and starts importing your application's modules automatically gluing them together.

Pyramid on the other hand, use dot-notation for specification where the things are, this makes the configuration code much cleaner. Plus it allows you to decorate views like Flask but without using the app object (thanks to venusian library).

Let me give you an example:

A middleware is a great concept - easy to understand and very powerful. This is the reason most of the frameworks implement them.

What we have in Flask? @before_request and @after_request decorators. Not only they encourage you to write one big ugly function that does everything before and after the request as opposed to feature-specific middlewares but also:

I have seen a dozen custom implementations of permissions logic in Flask. This proves my point that Flask is chosen as a framework for beginners but then it forces the developer to write quite difficult code around it. As a sidenote permissions have solid implementation both in Django and Pyramid out-of-the-box.

This is caused by Flask using Global Context. If you have request context, script context and, celery context then you have to think in which context to run given test.
If you don't prepare your testing framework at the very beginning of app develpment then it is really hard to do so later.

There are 3 reasons you can think that Flask is the right framework for you, let me pick them apart one by one and present alternatives.

I was not able to find a single reason why to use Flask, if you have one, please let me know in the comments down below. I’d be happy to prove you wrong :)

When creating a React application, eventually we will come across a point where we need to pass some data from one component to another. And what is the simplest way to do this?...